We asked over 1,000 freelance writers all over the world how they're doing in light of the COVID-19 pandemic. They also shared:

It's been several weeks since the COVID-19 pandemic radically changed daily life the world over. Most of us are sequestered in our homes adjusting to new realities and trying to stay healthy as the story continues to develop.

From "gig economy" breadwinners to contractors with revolving sources of income, widespread economic shutdowns do more than just compromise earning potential; they leave exposed professionals who don't have the same protections salaried or even hourly employees may be able to take advantage of.

That's why we wanted to do a quick pulse check on the freelancer market.

If you're a freelancer reading this, hopefully, you'll come away strangely encouraged (we did) and if nothing else, know that you are not alone in what you're facing right now.

"I've had one digital marketing client that was just on the cusp of signing a deal and has now completely stopped responding to me," said one of the respondents.

For others, the loss of work was absolutely devastating. "Eighty percent of our retainer revenue was lost in 48 hours," said one agency marketer. "We have several content creation contracts and every one of them canceled (hopefully temporarily) because of closing their businesses."

For example, roughly 56 percent of freelancers we surveyed do not have full-time employment elsewhere to rely on when freelance opportunities dry up. Among that cohort, 64 percent do not have a partner's income or family help to fall back on, either.

"Frankly, this has been a positive shift for me career-wise because it’s forced me to think more creatively and take some risks."

"Dwelling on stress doesn't actually make the problems go away," said Jessica, a full-time artist and writer in Mexico City. "If you're not making money and there's nothing you can do about that, put your energy into a passion project. Doing that will only make your life better."

Many businesses are in the midst of making difficult cuts to stave off recession hardships. Because of this, it's tough to get a real idea of the actual economic impacts on various markets right now.

Most respondents said their online publishing gigs (ranging from "celebrity puff pieces" to viral listicles) had either reduced workloads or disappeared overnight. 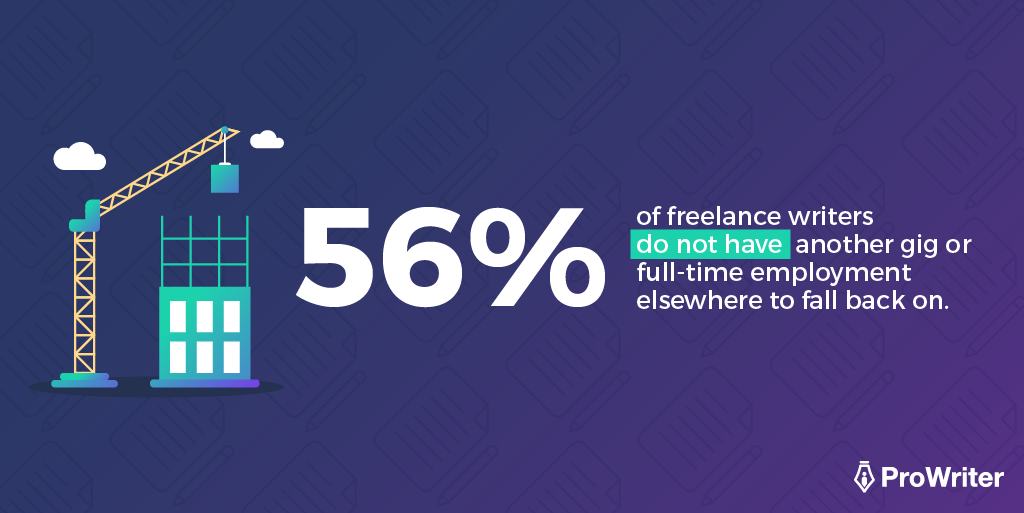 Other markets that seem to be struggling include travel, food service, and nonessentials. One writer remarked that the hospitality industries are "practically non-existent right now."

Casey, a writer and editor based in Ontario, said that the legal field has been a surprise casualty. "Work based on legal decisions is drying up fast because most courts and administrative tribunals have stopped hearing non-urgent cases."

"The content has changed to go with the times, but more and more people are online, so I have more work," they said.

Rita, a freelancer based in Chicago, said that while she's moderately concerned, she hasn't seen a dip yet that falls outside the norm. "Last week, I had almost no work. This week, I'm overloaded again. It's about the same as usual; feast to famine and back every other week."

"There is work, but you must go out and build relationships to find it. And for the love of everything, stop taking less than 5 cents per word."

As businesses adapt to remote work, they'll find that freelancers are an excellent and cost-effective resource they can turn to for a variety of jobs they may have relied on in-house, salaried workers for.

"As a writer, there are a host of opportunities to write about COVID-19 and all of its impacts. Demands have actually gone up," said Gary, a writer based in Los Angeles. "There seems to be no shortage of demand for content, so I am keeping extraordinarily busy."

"I think (worry, really) that a lot more people will be working from home, and that the platforms will be flooded with new talent and people willing to work for less," said Jessica, a freelance writer and editor from Coudersport, PA.

"You have time now, and lots of it. Build your portfolio. Write that fiction story you've had tumbling around in your mind for years. Journal your thoughts in a daily or weekly blog."

Industry vets like Keith, a freelance writer with 18 years' experience, worries that writers just starting out will have a harder time. "The competition just got a lot harder. The crisis might help well-established freelance writers. Anyone else might find it difficult to land gigs."

However, some writers, though moderately concerned, think there will be an opportunity to make up for lost time. "I really believe that the economy will surge after this," said Alicia, a part-time writer based in New York. "I am hopeful that I will make up any lost income."

Lastly, we asked the full-time industry vets to provide some advice for the freelancers who are just starting out, haven't built up a reliable client base yet, and might be more worried about their prospects.

"Stay calm, showcase your talents clearly, and don't reduce your rates just because of the current global situation," said Jake, South Africa-based writer. "You're worth your rates (probably even more than your rates). Don't belittle your worth simply due to an epidemic."

"Specialize!" wrote Jason, a Marketing Strategist from digital media firm Mediastead. "There are hundreds of thousands of freelancers hustling for $50 jobs writing blog posts. The more niche your services, the more likely you will get high dollar value monthly retainers."

"Don't panic.," said Mandy, a writer based in the UK. "Every year there's a time where work load is low. What we do know is that this will be over at some point."

We're always looking for feedback on how we can help freelancers with the problems they are actually facing. If you have some thoughts or feedback, or want to get in touch with us, you can do so here.

Dave is a professional copywriter and owner of ProWriter. He's combined his passion for community building and creative writing into a solution that allows thousands of professional writers to earn a living doing what they love.

Gain access to ProWriter's tools, courses, jobs board, and community to help you launch and grow your freelance writing career.

Not a member?  Join Now!